I’ve always felt that a lot of innovation happens where resources are scarcest. Scarcity forces us to think differently, to be efficient and to question traditional (more expensive) models.

This is why I’m always interested to see how local governments in developing economies are handling various problems. There is always an (enormous) risk that these governments will be lured into doing things they way they have been done in developing economies (hello SAP!). Sometimes this makes sense, but often, newer, disruptive and cheaper ways of accomplishing the goal have emerged in the interim.

What I think is really interesting is when a trend started in the global south migrates to the global north. I think I may have just spotted one example.

The other week the City of Boston announced its City Hall to Go trucks – mobile vans that, like food trucks, will drive around the city and be at various civic events available to deliver citizen services on the go! See the video and “menu” below. 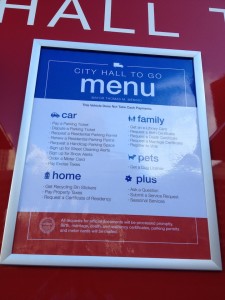 This is really cool. In Vancouver we have a huge number of highly successful food carts. It is not hard to imagine an experiment like this as well – particularly in underserved neighborhoods or at the numerous public festivals and public food markets that take place across the city.

But, as the title of this post suggests, Boston is not the first city to do this. This United Nations report points out how the state government of Bahia started to do something similar in the mid 90s in the state capital of Salvador.

In 1994 the Government of Bahia hosted the first of several annual technology fairs in the state capital, Salvador. A few government services were offered there, using new ICT systems (e.g., issuing identification cards). The service was far more efficient and well-received by the public. The idea was then raised: Why not deliver services this way on a regular basis?

…A Mobile Documents SAC also was developed to reach the most remote and deprived communities in Bahia. This Mobile SAC is a large, 18-wheel truck equipped with air-conditioning, TV set, toilets, and a covered waiting area. Inside the truck, four basic citizenship services are provided: issuance of birth certificates, identification card, labor identification card, and criminal record verification.

I feel very much like I’ve read about smaller trucks delivering services in other cities in Brazil as well – I believe one community in Brazil had mobile carts with computers on them that toured neighborhoods so citizens could more effectively participate in online petitions and crowdsourcing projects being run by the local government.

I’m not sure if the success of these projects in developing economy cities influenced the thinking in Boston – if yes, that is interesting. If not, it is still interesting. It suggests that thinking and logic behind this type innovation is occurring in several cities simultaneously, even if when these cities have markedly different levels of GDP per capita and internet access (among many other things). My hope is that those in government will be more and more willing to see how their counterparts elsewhere in the world – no matter where – are doing things. Money is tight for governments everywhere, so good ideas may be more likely to go from those who feel the burden of costs the greatest.

2 thoughts on “The South -> North Innovation Path in Government: An Example?”