The other week I was invited down to the Bay Area Drupal Camp (#BadCamp) to give a talk on community management to a side meeting of the 100 or so core Drupal developers.

I gave a hour long version of my OSCON keynote on the Science of Community Management and had a great time engaging what was clearly a room of smart, caring people who want to do good things, ship great code, and work well with one anther. As part of my talk I ran them through some basic negotiation skills – particularly around separating positions (a demand) from interests (the reasons/concerns that created that demand). Positions are challenging to work with as they tend to lock people into what they are asking and makes outcomes either binary or fosters compromises that may make little sense, where as interests (which you get by being curious and asking lots of whys) can create the conditions for make creative, value generative outcomes that also strengthen the relationship.

Obviously, understanding the difference is key, but so is acting on it, e.g. asking questions are critical moments to try to open up the dialogue and uncover interests. 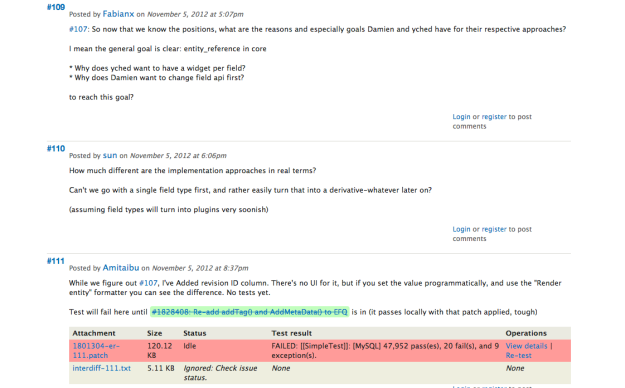 I love the questions. This is exactly the type of skill and community norms I think we need to build tino more of bug tracking environments/communities, which can sometimes be pretty hostile and aggressive, something that I think turns off many potentially good contributors.