Yesterday the Martin Prosperity Institute released its report Ontario in the Creative Age. I’ve been reading through it with great, great interest. The influence of Rise of the Creative Class and Who’s Your City is obvious (and expected) and the report is an important and fantastic read. Regardless of whether or not you live in the GTA/Ontario, I highly recommend it. Indeed, I would love to see the Province of British Columbia and the Metro Vancouver commission a similar report. I can imagine the methodology is now in place to do one relatively quickly, and it is urgently needed on the west coast. (Can anyone point to an economic development plan for the Greater Vancouver Area? For the City of Vancouver?)

The report also plays on a theme that has interested me for a while now. The nature of class conflict in networked and creative economy. The report tackles the issue more directly than anything else I’ve seen by Florida to date. This line from the report is illustrative:

The rise of creativity is a double-edged sword. It creates tremendous wealth creation opportunities for some. Yet it can leave many behind – particularly those in jobs built on routine, and those who do not have the opportunity to gain the skills to participate advantageously in the economic transformation we are going through.

Still more interesting are the trends: 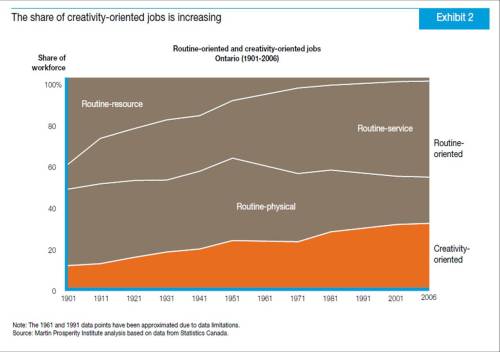 Combine this chart with there second chart that shows how wages grow depending on skill sets (no prizes for figuring out the Routine-physical-oriented jobs correlate with Physical Skills and that Social intelligence skills correlate with Creativity-Oriented jobs). 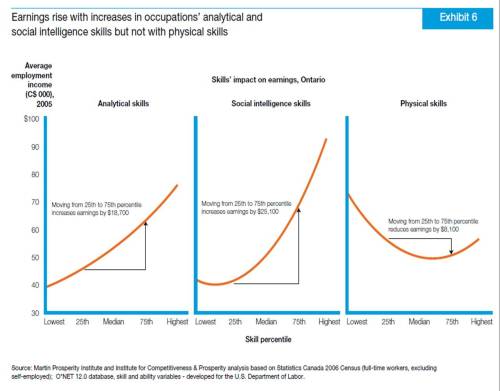 It is easy to see that the possibility of tension between routine-oriented and creativity-oriented workers could grow, especially as wage differences continue to increase.

Perhaps the most depressing conclusion to draw from this report is that the stimulus package will do little to address this inequity. A lot items that get funding in such packages (for example, some shovel ready projects) not only generate only temporary growth, but many of the jobs they foster are both becoming fewer – so we are encouraging job growth in shrinking job markets – and have a declining return on investment – so we are encouraging the development of skill-sets in workers that will not increase wages. Consequently, the very actions that traditionally might have helped stave of wage inequality (and in turn class conflict) may actually me exasperating the future likelihood of such inequality.

It’s hard to sell funding for R&D and research as these are often seen as “elite” activities, but interestingly they may offer us the greatest hope in reducing future tension and inequality. Sadly, research, science and education received little attention in the budget.

1 thought on “The creative age, the budget and the future of class conflict”