I’ve been doing a lot of thinking about access to information, and am working on a longer analysis, but in the short term I wanted to share two graphs – graphs that outline why Access to Information (Freedom of Information in the United States) is unsustainable and will, eventually, need to be radically rethought.

First, this analysis is made possible by the enormous generosity of the Canadian Federal Information Commissioners Office which several weeks ago sent me a tremendous amount of useful data regarding access to information requests over the past 15 years at the Treasury Board Secretariat (TBS).

The first figure I created shows both the absolute number of Access to Information Requests (ATIP) since 1996 as well as the running year on year percentage increase. The dotted line represents the average percentage increase over this time. As you can see the number of ATIP requests has almost tripled in this time period. This is very significant growth – the kind you’d want to see in a well run company. Alas, for those processing ATIP requests, I suspect it represents a significant headache. 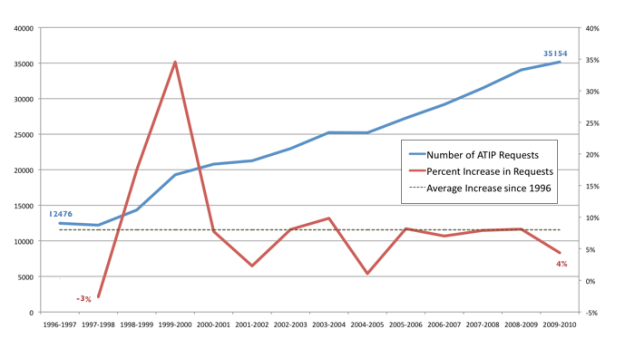 That’s because, of course, such growth is likely unmanageable. It might be manageable if say, the costs of handling each requests was dropping rapidly. If such efficiencies were being wrestled out of the system of routing and sorting requests then we could simply ignore the chart above. Sadly, as the next chart I created demonstrates this is not the case.

In fact the costs of managing these transactions has not tripled. It has more than quadrupled. This means that not only are the number of transactions increasing at about 8% a year, the cost of fulfilling each of those transactions is itself rising at a rate above inflation.

Now remember, I’m not event talking about the effectiveness of ATIP. I’m not talking about how quickly requests are turned around (as the Information Commissioner has discussed, it is broadly getting worse) nor am I discussing less information is being restricted (it’s not, things are getting worse). These are important – and difficult to assess – metrics.

I am, instead, merely looking at the economics of ATIP and the situation looks grim. Basically two interrelated problems threaten the current system.

1) As the number of ATIP requests increase, the manpower required to answer them also appears to be increasing. At some point the hours required to fulfill all requests sent to a ministry will equal the total hours of manpower at that ministry’s  disposal. Yes that day may be far off, but they day where it hits some meaningful percentage – say 1%, 3% or 5% of total hours worked at Treasury Board, may not be that far off. That’s a significant drag on efficiency. I recall talking to a foreign service officer who mentioned that during the Afghan prisoner scandal an entire department of foreign service officers – some 60 people in all – were working full time on assessing access to information requests. That’s an enormous amount of time, energy and money.

2) Even more problematic than the number of work hours is the cost. According to the data I received, Access to Information requests costs The Treasury Board $47,196,030 last year. Yes, that’s 47 with a “million” behind it. And remember, this is just one ministry. Multiply that by 25 (let’s pretend that’s the number of ministries, there are actually many more, but I’m trying to be really conservative with my assumptions) and it means last year the government may have spent over $1.175 Billion fulfilling ATIP requests. That is a staggering number. And its growing.

Transparency, apparently, is very, very expensive. At some point, it risks becoming too expensive.

To be clear, I’m not saying we should get rid of ATIP. That, I believe, to be folly. It is and remains a powerful tool for holding government accountable. Nor do I believe that requesters should pay for ATIP requests as a way to offset costs (like BC Ferries does) – this creates a barrier that punishes the most marginalized and threatened, while enabling only the wealthy or well financed to hold government accountable.

I do think it suggests that governments need to radical rethink how manage ATIP. More importantly I think it suggests that government needs to rethink how it manages information. Open data, digital documents are all part of a strategy that, I hope, can lighten the load. I’ve also felt that if/as government’s move their work onto online platforms like GCPEDIA, we should simply make non-classified pages open to the public on something like a 5 year timeline. This could also help reduce requests.

I’ve more ideas, but at its core we need a system rethink. ATIP is broken. You may not know it yet, but it is. The question is, what are we going to do before it peels off the cliff? Can we invent something new and better in time?