Earlier this week I posted a slidecast on my talk to Canada’s Access to Information Commissioners about how, as they do their work, they need to look deeper into the government “stack.”

My core argument was how decisions about what information gets made accessible is no longer best managed at the end of a policy development or program delivery process but rather should be embedded in it. This means monkeying around and ensuring there is capacity to export government information and data from the tools (e.g. software) government uses every day. Logically, this means monkeying around in procurement policy (see slide below) since that is where the specs for the tools public servants use get set. Trying to bake “access” into processes after the software has been chosen is, well, often an expensive nightmare. 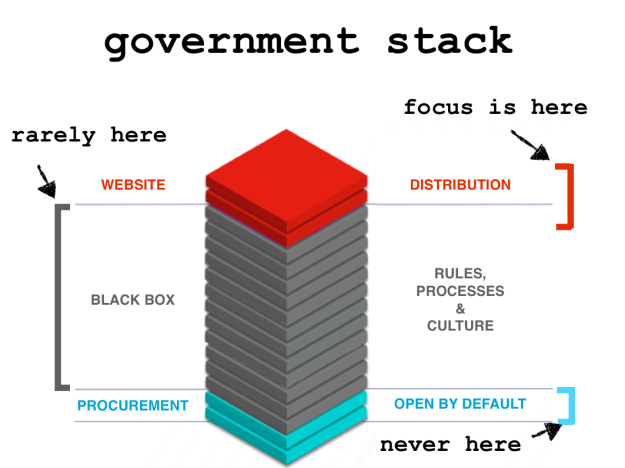 Privately, one participant from a police force, came up to me afterward and said that I was simply guiding people to another problem – procurement. He is right. I am. Almost everyone I talk to in government feels like procurement is broken. I’ve said as much myself in the past. Clay Johnson is someone who has thought about this more than others, here he is below at the Code for America Summit with a great slide (and talk) about how the current government procurement regime rewards all the wrong behaviours and often, all the wrong players.

So yes, I’m pushing the RTI and open data community to think about procurement on purpose. Procurement is borked. Badly. Not just from a wasting tax dollars money perspective, or even just from a service delivery perspective, but also because it doesn’t serve the goals of transparency well. Quite the opposite. More importantly, it isn’t going to get fixed until more people start pointing out that it is broken and start contributing to solving this major bottle neck of a problem.

All of this becomes more important if the White House’s (and other governments’ at all levels) have any hope of executing on their digital strategies (image below).  There is going to be a giant effort to digitize much of what governments do and a huge number of opportunities for finding efficiencies and improving services is going to come from this. However, if all of this depends on multi-million (or worse 10 or 100 million) dollar systems and websites we are, to put it frankly, screwed. The future of government isn’t to be (continue to be?) taken over by some massive SAP implementation that is so rigid and controlled it gives governments almost no opportunity to innovate. And this is the future our procurement policies steer us toward. A future with only a tiny handful of possible vendors, a high risk of project failure and highly rigid and frail systems that are expensive to adapt.

Worse there is no easy path here. I don’t see anyone doing procurement right. So we are going to have to dive into a thorny, tough problem. However, the more governments that try to tackle it in radical ways, the faster we can learn some new and interesting lessons. 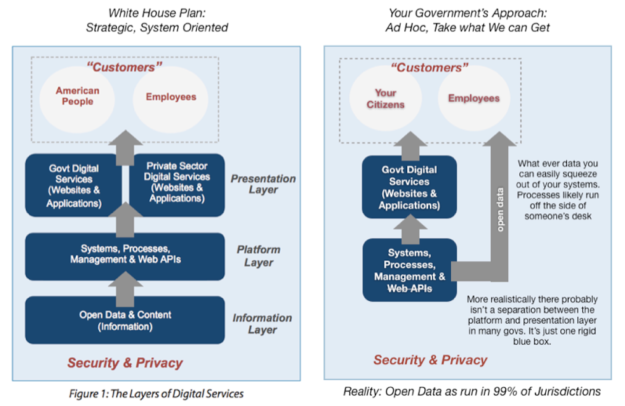