There is a nice gala Vision Vancouver fundraiser coming up on February 4th for those who are interested. Here’s an opportunity to mix it up with the new Mayor and Vision Council members.

As the advertisement states:

Enjoy an evening of specialty tapas highlighting the multitude of Vancouver’s diverse neighborhoods, while mingling with Vancouver’s elected officials, business leaders, union brothers and sisters, social and environmental change agents, and others who are working to make a difference in their communities.

Tickets are $150.00 each with sponsorship opportunities available – for more information call Vision’s Fundraiser Kristi Rivait at 604-568-6913 or email her at kristi@votevision.ca

For those living in Vancouver, or interested in Vancouver politics, the CBC will be hosting a debate tomorrow between Vision Vancouver Mayoralty candidate Gregor Robertson and his NPA counterpart.

For those listening in on or attending the debate, the CBC is interested in hearing your immediate thoughts and feedback via twitter – simply tag your tweet: #cbcmayorsdebate and the CBC may pick it up. Thoughtful comments about Gregor, concerns about the city, or respectfully expressed concerns about NPA spin are particularly appreciated.

For those interested in the debate it is taking place tomorrow, Wednesday, November 12, from 7:30 – 9:00 p.m. at the SFU’s Segal Graduate School of Business, 500 Granville St.. It will also be broadcast live on CBC Radio One (690AM) in Vancouver and streamed live over “the interweb” at cbc.ca/bc.

If you are a vision supporter – we are in crunch time. Please do vote!  Also consider donating some money or volunteering for our e-day get out the vote initiative and, to have fun, get yourself on “the map!”

I just got news that Vision Vancouver as grown to become (what we believe to be) the largest political party in Canada. This is meteoric growth and confirms my hope that Vancouverites are increasingly looking for a progressive, centrist party to guide the city in the 21st century. I’m pretty excited to be part of this.

Vision Vancouver announced today that they have had over 11,000 new members join in the past two months, driven by the excitement of Vision’s mayoralty nomination race. Raymond Louie, Al De Genova, and Gregor Robertson are competing for the Vision nomination.

“Congratulations are in order to Raymond, Al, and Gregor, who have inspired thousands of people to join Vision,” said Vision co-chair Mike Magee. “With over 11,000 people joining in recent weeks, it shows how fed up people are with Sam Sullivan and the NPA, and that they like the alternative they see in Vision Vancouver.”

“People need a government that will work for solutions to end homelessness, make housing affordable for future generations, and protect our environment. These results show that people are hungry for change in this city.”

“It’s amazing that in such a short time, Vision Vancouver could quite possibly now be the largest civic political party in Canada,” Magee added.

Thursday, May 15th was the last possible day to become a Vision member and be eligible to vote at the nomination meeting in June. Preliminary results show that well over 11,000 new members have signed up in the past two months, with a final total to be determined within the next two weeks. The mayoralty nomination meeting takes place on Sunday, June 15th at the Croatian Cultural Centre.

“Our three Mayoral candidates have worked tirelessly to engage people all over Vancouver, and as a result we’re building a winning coalition across the city,” said Magee.

“The sheer size of the Vision membership proves that the people of Vancouver want progressive leadership back in City Hall.

* first up – apologies for no post yesterday. It was a holiday in BC. Sometime later this week I’ll describe in greater detail my ridiculously BC-like day of island hoping, sea kayaking and BBQing. And to complete the leftcoast feel, a Smart Car was involved too.<!–

Second up… The Canada Line, the new subway being constructed between Richmond, the airport and Vancouver. The damage the construction has caused to businesses along the Cambie street corridor has been getting an increasing amount of buzz in the press. The whole situation is a fabulous lesson in urban planning and civic policy-making – one that sadly the press has not articulate.

For those out east who are not familiar with the Canada Line or its construction, it looks something like this: 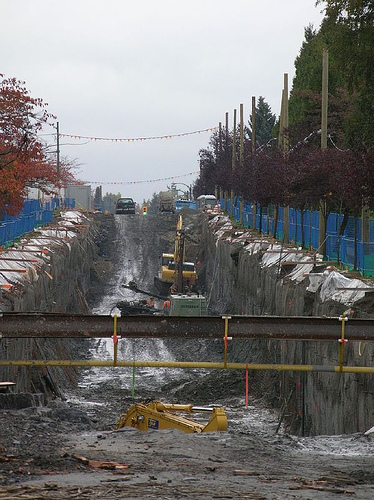 Sadly, these photos fail to do the situation justice. To put it bluntly, when there is a two story deep hole outside, traffic is at a stand still, the street is unpassable, and there is the endless sound of construction, people tend to stay away. This, needless to say, has made life difficult for the numerous businesses that populate the Cambie St. corridor.

As one can imagine, several businesses (most notably the restaurant Tomato) have moved, several others are complaining. The local MLA – Gregor Robertson – has even introducing a private member’s bill to provide affected businesses with direct financial support.

But is the construction responsible for the death of the Cambie st. businesses? Perhaps. But it is an inevitable death. And this is why the current public policy has so dramatically failed these businesses.

I’ve noted with interest that while businesses complain loudly about the construction and its impact, it is hard to find landowners who complain. One would think that the loss of tenants – and subsequent rental income – this would have generated a fuss. But it hasn’t.

Why? Because the landlords know that once the line is complete most of the Cambie corridor (currently composed of relatively low density commercial buildings) is going to be completely redeveloped. Higher density commercial and, more importantly, condos, are going to be common place along Cambie. Consequently, there is a good chance that if the construction hadn’t kicked these businesses out, their landlords would have in the ensuing rush to redevelop.

Thus the whole notion that Cambie businesses could be kept open was a mirage – a failure to look at the longer term implications of the Subway. Rather than waste time on a failed “Business is Open along the Canada Line” campaign (This is not a communication problem, advertising is not going to bring people to Cambie, only an end to the construction will) local businesses should have been offered money to move location and cover some of their transition costs. While this would have been painful for everyone involved, it would have been less painful then seeing their business dry up and having to move on their own dime.

* Aug 8th: The Vancouver Sun published this editorial piece on the same day as this post that provides a parallel but different perspective.