So earlier today I saw this post by Kevin Gaudet, Federal Director of the Canadian Taxpayers Federation and retweeted by Andrew Coyne (one of the country’s best commentators).

It pretty much sums up why Governments (incorrectly) fear open data and open government: 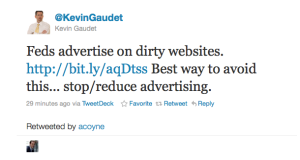 The link is to a story on The Sun’s website: Government agencies caught advertising on sex sites!!!! (okay, the exclamation marks are mine).

This is exactly the type of headline every public servant and politician is terrified of. The details, of course, aren’t nearly as salacious. A screenshot Photoforum.ru reveals its a stock photo website (which probably does violate all sorts of copyrights) and, I am sure, there are some photos, somewhere on the site, of nude women, much like there are on say Flickr or Facebook. 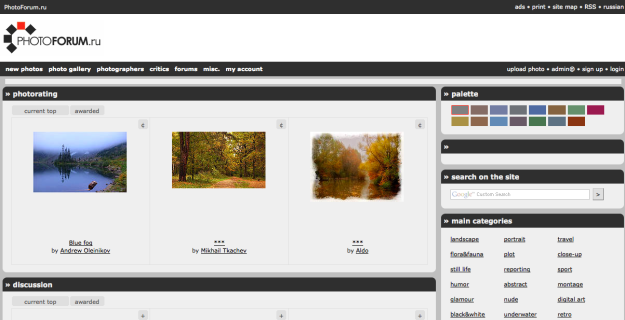 1. The challenge: Non-stories suck time and energy. The government, of course, didn’t choose to advertise on Photoforum.ru. It hired an agency, Cossette, that placed the ads through Google AdSense. (this is actually the good part of the story – great to hear that the government is using Google AdSense which is a cheap and effective way to advertise). But today, I assure you that dozens of public servants, at least one member of the Heritage Minister’s political staff and a few Canada Post employees are spending the next few days running around like chickens with their heads cut off trying to find out how an ad in a $5000 contract ended up on a relatively harmless site. The total cost of all that investigative work and the reports they will generate to address this “scandal” will probably cost taxpayers $10,000s, if not $100,000s in staff time and energy. No wonder governments fear disclosure. The distraction and cost in time and energy needed to fix a non-story is enormous.

2. The diagnosis: The accountability systems trap: What’s interesting of course, is everybody is acting rationally. The Sun (while stretching the truth) is reporting on the misuse (however minor) of taxpayer dollars. Same with the Canadian Taxpayers Federation (CTF). But the solutions are terrible. The CTF demand that the government eliminate all advertising is nonsensical. We can debate whether every ad is needed, but a flat out ban is silly. There are lots of things governments need to inform citizens about. So we can talk about reducing the government’s ad budget, but this news story doesn’t advance that aim either. Indeed, the Canadian Taxpayers and the Sun have, indirectly, helped inflate the cost of government. As noted, the government, acting rationally, now has dozens of people spending their time solving a crisis around a some minor ad campaigns.

So we have a system where everyone is behaving rationally. But the outcome are terrible. This is the scandal. Indeed, if one were really concerned about the effective spending of taxpayer dollars what one would quickly realize that what’s actually broken here isn’t government advertising, it’s the process by which governments react to and address problems.

3. One Approach: Patch-Culture and Open Data. So it is understandable that government types fear disclosure as, presently, they often seeing it leading to the above situtation.

But what’s interesting is that we could handle it differently.

This same story, in the software world, would have been quite different. The Sun article would have simple been understand as someone pointing out a (minor) bug. The software developers (in the case the public servants) would have patched it (which they did, ending the ads deployment to these sites) and the whole thing would have been a non-event. But at least, for minimal cost and effort, the software (ad program) would be better making both the developers (public servants/politicians) and users (taxpayers) happy. So why is it so different with government?

First. Government’s pretend that everything they do is perfect. They live with an industrial worldview where you had to get something perfect before launching it since you were going to stamp out 100,000 copies of the things and any bug would get replicated that many times. Of course, very little of government is like this, much more of it is like software where you can make fixes along the way. What makes software so great (although sometimes frustrating too) is that they acknowledge this and so patch it on the fly. Patch-culture – as my friend David Humphrey likes to call it – where people help software get better by point out flaws, and even offering solutions, is exactly what our government needs to learn.

Second. People jump to the worst conclusions because governments appear secretive. Because they don’t proactively disclose (and because Access to Information process is sooooo slow) they always look like they are hiding something. Consequently, when people find mistakes they presume people have been hiding it, trying to cover it up and/or that it was made with some malicious intent. In an open source community, when people find a bug, they often assume it was a (dumb) mistake – not a nefarious plot to do achieve some dubious ends. Open data makes a patch culture easier to create because when you share what you are doing it is hard to believe you have some evil intent. Yes, people may just assume you are dumb – but that is actually better than evil (especially for powerful institutions like government).

Open data is about changing the culture everywhere, both inside and outside government. It won’t do it over night and it won’t do it perfectly but it can help. And it’s a shift we need to make.

I could easily have imagined the above story playing differently in world where patch culture has taken shape within government. Someone discovers the ads on photoforum.ru, thinks it is an error (someone made a dumb choice), submits a bug to the government, the ads are removed, the bug is patched, everybody is happy and… no wasteful non-story about government spending.

Indeed, we could have instead allocated all that wasted time and energy to have the debate the CTF actually wants to have: how much of the budget should go towards advertising.

What we need to be thinking about is what is the system we are in, what are the incentives it creates for the various actors and then think of the system we’d like, and figure out how to get from here to there. I think Open Data is an important (but not exclusive) part of the puzzle for changing the relationship between the government, the press and citizens. It may even create some new problems, but I think they will be better, less costly and more interesting problems then the ones we have now, we are frankly destroying budgets and the institutions we need to serve us.