Those who’ve been reading my blog for a long time may remember one of my more popular posts comparing the Firefox 3 Pledge Map (locations of downloads of Firefox 3 back in June 2008) versus Thomas Barnett’s Map (published in The Pentagon’s New Map – his blog here). 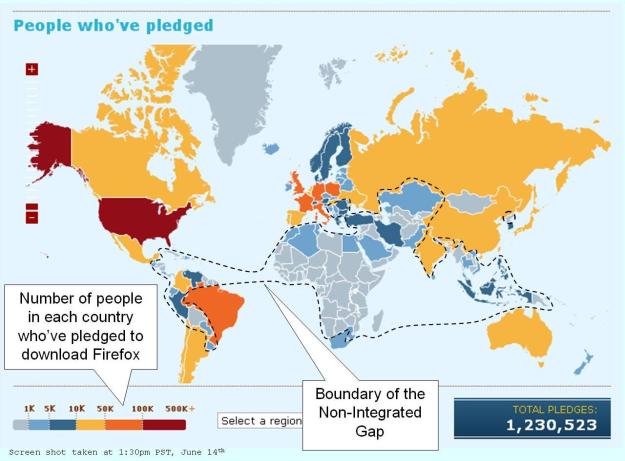 A little while back a friend shared with me a new map, called The Walled World, that she’d found over at The Raw Feed (a great site, BTW) which offers a similar perspective… but with clearly delineated walls that show who is being kept out of which parts of the world.

All three maps continue reasonate with me. The first offers us a stategic overlay. Which countries are powers/maintainers of the international system – which places are seeking to radical alter it, or cannot seem to become part of the core.

The second shows the virtual implications of that gap. Here, the gap between core and periphery is made starkly clear in technology use.

The final shows the physical manifestation of the gap. A stark reminder of the fences we build and the enormous sums of money and energy poured into keeping certain people out.

As a final note, I do think the third map is slightly misleading. As disturbing as it is, it is actually far, far too flattering to many traditional western powers as it continues to place them at the “centre.” In a world where the United States appears to be in decline this type of map makes China, Brazil, India and Russia (and even South Africa) look like non entities. Nothing could be further from the truth.

Just started Who’s Your City by Richard Florida out of personal interest but also to better figure out why it is the Vancouver sometimes works, and sometimes really doesn’t work. Figuring out that puzzle, and doing something is part of the reason I joined Vision (and yes, I’m still recovering from the victory celebrations).

I’m already sensing a convergence between Florida and some of my other favourite authors – namely Friedman (who Florida references) and Thomas Barnett (author of The Pentagon’s New Map among other books).

All three are noticing the same thing, and are even writing along similar veins, but there remain important distinctions, with important policy implications.

Flat: Friedman (whom I’m least familiar with) says the world is flat, that innovation, industry, commerce, etc… can now happen anywhere, so we have to prepare for a flat world. Here, I’d argue the core unit of analysis is the individual. We are all free agents, able to do anything or be anything, so we’re going increasingly going to start doing it anywhere. Yes, Friedman believes that governments and industry have massively important roles, but he ultimately sees a world where any place can become a place where people can prosper. If they agitate for it and build it.

Spiky: Florida’s analysis is that world is quite spiky, dominated by a set of mega-regions and super-cities where the bulk of the economic activity and culture is produced. These hubs are connected to one another and largely uncaring of the enormous economic valleys that separate them. For Florida, the fundamental unit of analysis is the city (or mega-region). These determine where power and influence will flow. Importantly, mega-regions cannot be constructed overnight – indeed there is a powerful self-reinforcing mechanism at work. Mega-regions attract talent from around the world, both further increasing their status and starving smaller cities and regions of the key resource – social capital – they need to grow. Individuals are important – but only in so far as they cluster. Countries are important too – in the Friedman sense that they create a generally favourable atmosphere – but they are not critical to the equation.

Divided: Barnett sees a divided world. One on the one side is the Functioning Core, characterized by economic interdependence and incentives to abide by rules, one the other is the Non-Integrated Gap characterized by unstable leadership and absence of international trade and weaker incentives to abide by international rule sets. Barnett’s primary unit of analysis is the state. He is principally concerned with the impact of globalization (and the rule-sets it creates) on state actors – how it constrains them and incents them to behave certain ways. In this world citizens are influence, but it is connectivity, largely (but hardly completely) determined by the state that matters most. Convince a state to connect with the world, and it’s path towards free market democracy (or some close variant) is predetermined.

I had so much fun mashing up the Firefox download map with Barnett’s map (and had an incredible response) I thought I’d try to do the same again but with these three authors. Below is a Flat World, overlaid with Spiky depiction of where the most innovation (patents) occurs, overlaid with Barnett’s division between the Function Core and the Non-Integrated Gap. Hoping to write more about these three views of the world over the coming weeks.

What’s interesting about the map’s below is that Barnett and Florida correlate quite nicely. And while they are complimentary I think it Florida’s reinforces the best critique of Barnett’s map I’ve read to date:

“Connectedness is a network property and networks are fractal not contiguous. There is no contiguous region that is disconnected. Within each disconnected country there are islands of connection and within each connected country there are islands of disconnection. This is true at all levels, continents, nations, regions, cities, and companies, right down to individuals. There are terrorist cells in US cities fighting to disconnect the world and Journalists with satellite cell phones in remotest Afghanistan, Iraq, and Somalia working to connect everything.”

I’m willing to bet almost anything that Florida’s maps follow a power law distribution. And the above description – well in Florida’s map there are valleys of non-innovation and non-connectivity within Barnett’s Core. The question is: Can the Mega-Regions assert enough control over these values to ensure their rule-sets are followed?

So with the help of my very cool friend Jeremy V. we’ve remixed the Firefox download map.

The official download map shows us the absolute number of downloads per country. From a marketing perspective this was a great idea. However, since writing the post in which I mashed up the Pentagon’s New Map with the Firefox pledge map I’ve been wondering if their is a correlation between the number of pledges/downloads of Firefox and how “connected” a country is.  To find out, we’ve recreated the Mozilla download map but changed the variables. Using population census and internet user stats from Wikipedia.

Remix 1: % of population that downloaded firefox

You need to upgrade your Flash Player

You need to upgrade your Flash Player

Lots to dive into here. Most notable is how India and China’s strong showing in the initial download map is obviously nothing more than a function of their sheer size. In the later two maps they do not fare as well. The fact that other browsers dominate the marketplace in these countries may also play a role. This is certainly the case in China (though I’m less certain about India). Either way though Firefox’s presence in China and India is a lot weaker than the download map suggests. What, if anything, can be done about this is worth debating.

The biggest surprise has to be Iran. It would appear that Iran is anything but the insular isolated country the western media likes to portray it as. Indeed, outside of the western world Iran has one of the highest download rates per capita. This would suggest Iran is quite well connected (and, I suspect, deeply mistrustful of MicroSoft). This should pose a challenge to Barnett’s thesis, in which connectedness should make a country safer to the international system. John Harris who wrote an excellent critique of Barnett’s thesis, would argue that Iran isn’t perceived as a threat because it is disconnected (it clearly is connected). Instead, what makes it a threat is that a ruling elite strives (however unsuccessfully) to keep it as disconnected from the rest of the world as possible. This creates tensions and challenges that exasperate the complex challenge that is Iran.

One of the most interesting impacts of open source software is that it may help countries – especially those transitioning into modern economies – increase their connectiveness. These maps seem to confirm this hypothesis. A scan of the % of the population that downloaded Firefox shows a robust number of people in emerging economies – especially in Latin America, Eastern Europe and to a lesser degree, South East Asia. Indeed, the government’s of many Central and Eastern Europe countries have mandated that their public services use open source solutions where ever possible. With many countries in the region counting download rates at over 2% of the population(!!!!) Eastern and Central Europe really is emerging as a dominant market place for Open Source solutions.

Ultimately, what is notable is that Core countries do by and large well, Gap countries do poorly and countries that sit around much of the perimeter of Barnett’s line separating the “gap from “the core” score in between. For example, the deep pits of disconnectedness are focused around the Stans and Africa, broken up only by Iran and Israel. Consequently, in my opinion the the Firefox download map gives us data that validate Barnett’s thesis. The bigger question is what can open source generally, and Firefox specifically, do to help change the map?

Two notes:
1. Since being slashdotted I’ve received many comments and emails both encouraging and critical. Please keep sending them and adding to the analysis here. Many heads are better than one and so please do contribute
2. I apologize that data for some countries (like Iceland) is not available on this map. Recreating the map wasn’t easy, and it was all in our (and really Jeremy’s) spare time so we did the best we could.

What are the geopolitics of open source? To find out I thought it would be interested to see how Thomas Barnett’s map meshed with the Spread Mozilla Firefox 3 download pledge map.

Some brief background for those not familiar with “The Pentagon’s New Map.” It is a map that sits at the heart of a book of the same title written a few years ago by Barnett. It is a compelling take on what America’s grand strategy should be for the 21st century and how it is, and more importantly isn’t, ready to execute on it. Better yet, it is engaging, thought provoking, interesting, and written so anyone can read and understand it.

The core of the book’s thesis (remixed from Wikipedia and very high level) is as follows:

According to Barnett’s thesis, countries in the Non-integrated Gap, because they are less connected, should probably have fewer computer users, fewer people downloading software and fewer people participating in Open-Source projects. Mashing up his map with the Firefox pledge map might give us some a clue to how well open-source conforms to his thesis.

(Note, I’ve remixed Barnett’s map to make it is easier to read on a computer with the Function Core countries in green and the Non-Integrated Gap countries in red . You can find the original map here. 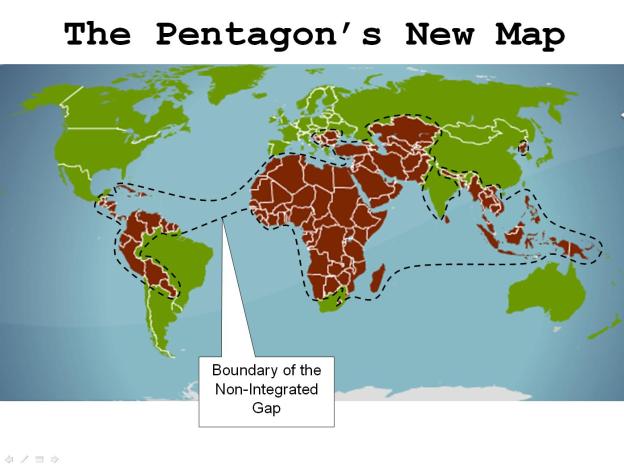 Below is the spread Firefox pledge map, which tracks how many people around the world have pledged to download Firefox on its release day (June 17th). I’ve overlaid the Non-Integrated Gap/Function Core border over it. 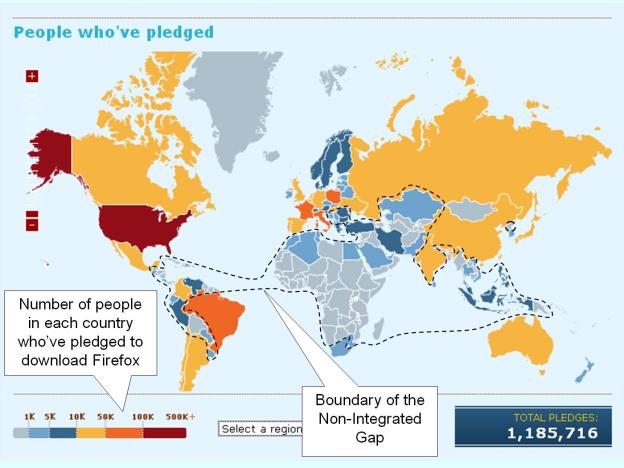 Lots more thoughts and analysis to be done on this. I hope to blog more on this shortly. If Barnett responds in any way I promise to update – would love to hear his thoughts/reflections on this.

(One final aside, if you get the chance to see Barnett present, do so. He’s up there with Lessig in his delivery. I remember seeing him at a conference. He went long by 10 minutes. The US ambassador to Canada was in the next room waiting to give the next presentation but if any of the organizers had tried to intervene and hurry Barnett up, they would have been lynched. FYI, You can see his TED talk here.)