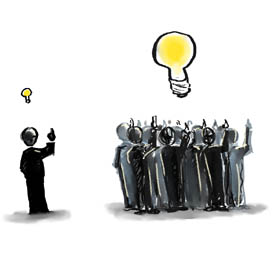 A few months ago I wrote a piece called the Death of Journalism which talked about how – even if they find a new revenue model – newspapers are in trouble because they are fundamentally opaque institutions. This built on a piece Taylor Owen wrote called Missing the Link about why newspapers don’t understand (or effectively use) the internet.

Today Nicolas T.  sent me this great link that puts some of the ideas found in both pieces into practice. Apparently, in the wake of the MP expense scandal in the United Kingdom, the Guardian has obtained 700,000 documents of MPs’ expenses to identify individual claims. Most MPs probably imagined they can hide their expenses in the sea of data, for what newspaper could devote the resources to searching through them all?

No newspaper could, if by “newspaper” you mean only its staff and not its community of readers. The Guardian, interestingly, has taken on this larger community definition and has crowd sourced the problem by asking its readers to download and read one or a few documents and report back any relevant information.

What makes this exciting is it is one example of how – by being transparent and leveraging the interest and wisdom of their readership – newspapers and media outlets can do better, more indepth, cheaper and more effective journalism. Think of it. First, what was once an impossible journalist endeavor is now possible. Second, a level of accountability previously unimaginable has been created. And third, a constituency of traditional (and possibly new) Guardian readers has been engaged – likely increasing their loyalty.

Indeed, in effect the Guardian has deputizing its readers to be micro-journalists. This is the best example to date of a traditional (or mainstream) media institution warming (or even embracing) at least a limited concept of “the citizen journalists.” I suspect that as institutions find ways to leverage readers and citizen journalists and that the lines between journalist and reader will increasingly blur. Actually it will have to.

Because for the Guardian model to work, they had to strike an agreement (a bargain – as Clay Shirky calls it) with their community. I don’t think anyone would have been satisfied to do this work and then simply hand it back to the Guardian without the right to access their work, or the work of other micro-journalists. Indeed, following the open source model, the guardian has posted the results for every document read and analyzed. This means that the “raw data” and analysis is available to anyone. Anyone of these micro-journalists can now, in turn, read the assemblage of document reviews and write their own story about the MPs expenses. Indeed, I’m willing to wager the some of the most interesting stories about these 700,000 pages will not be written by staff of The Guardian but by other parties assessing the raw data.

So what does that make the Guardian? Is it a repository, a community coordinator, an editorial service…? And what does it make those who write those stories who aren’t employed by the Guardian? Caring about, or getting caught up in these terms and definitions is interesting, but ultimately, it doesn’t matter. The fact is that journalism is being reinvented and this is one compelling model of why the new model can tackle problems the old one couldn’t even contemplate.

10 thoughts on “Open Source Journalism at the Guardian”