Yesterday, my friend Ducky Sherwood and her husband Jim published their own analysis, an important development for two reasons.

First, their analysis is just plain interesting… they’ve got an excellent breakdown of who is receiving what (Ontario is a big winner in absolute and per capita terms, Quebec is the big loser). Moreover, they’ve made the discussion fun and engaging by creating this map. It shows you every stimulus project in the country and where you click it will highlight nearby projects. The map also displays and colour-codes every riding in the country by party (blue for Conservatives, magenta for everyone else) and the colour’s strength correlates to the quantity of monies received. 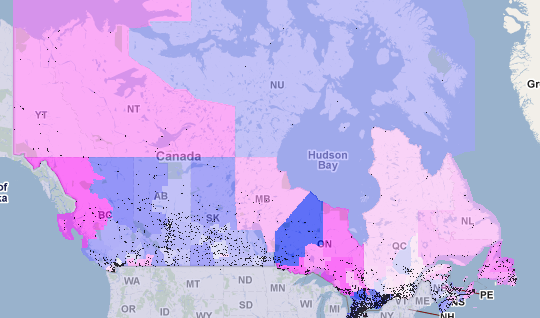 Second, and more interesting for me, is how their analysis hints at the enormous possibilities of what citizens can do when Government’s share their data and information about programs with the public in useful formats. (You can get spreadsheets of the data and for those more technically-minded the API can be found here). This is an example of the Long Tail of Public Policy Analysis in action.

This could have a dramatic impact on public discourse. Open data shifts the locus of power in the debate. Previously, simply getting the data was of value since your analysis would likely only compete, at best, with one or two other peoples (usually a news organization, or maybe a professor). But when anyone can access the information the value shifts. Simply doing an analysis is no longer interesting (since anyone can do it). Now the quality, relevance, ideological slant, assumptions, etc… of the analysis are of paramount value. This has serious implications – implications I believe bode well for debate and democracy in this country. Indeed, I hope more people will play with the stimulus data (like these guys have) and that a more rigorous debate about both where it is being spent and how it is being spent will ensue. (Needless to say, I believe that spending money on auto bailouts and building roads does little to promote recovery – the real opportunity would have been in seeding the country with more data to power the businesses of tomorrow).

There are, however, limits to Ducky’s analysis that are no fault of her own. While she can crunch the numbers and create a great map she is… ultimately… limited to the information that government gives her (and all of us). For example the data set she uses is fairly vague about the value of projects: the government labels them “under $100K” or “between $100K and $1M.” These are hardly precise figures.

Nor does the data say anything about the quality of these projects or their impact. Of course, this is what the debate should be about. Where, how effectively, and to what end is our money being spent? Ducky’s analysis allows us to get to these questions more quickly. The point here is that by opening up this stimulus money to popular analysis we can have a debate about effectiveness.

I don’t, for a second, believe that this will be an easy debate – one in which a “right” answer will magically emerge out of the “data.” Quite the opposite, as I pointed out above the debate will now shift to the economic, ideological and other assumptions that inform each opinion.  This could in fact create a less clear picture – but it will also be a picture that is more reflective of the diversity of opinions found in our country and that can scarcely be represented in the two national newspapers. And this is what is most important. Open data allows for a greater debate, one that more citizens can contribute and be a part of rather than just passively observe from their newspapers and TV screens. That is the real opportunity of open data is not that it enables a perfect discussion, but a wider, more democratic and thus, as far as I’m concerned, a better one.

(An additional note, while it is great that the government has created an API to share this data, let us not get too excited; it is very limited in what it tells us. More data, shared openly would be better still. Don’t expect this anytime soon. Yesterday the Government dropped 4,476 pages off at the Parliamentary Budget Office rather than send them a electronic spreadsheet (h/t Tim Wilson). Clearly they don’t want the PBO to be able to crunch the numbers on the stimulus package – which means they probably don’t want you to either.)

11 thoughts on “The Stimulus Map: Open Data and enhancing our democracy”